The newest projects include twin towers by Robert A.M. Stern Architects and a Diesel-branded condominium

With its low taxes, great weather and an increasingly sophisticated metropolitan quality of life, the booming Miami-Dade County real estate market shows no signs of letting up, with a new crop of luxury homes coming to market this spring.

Sales of homes over $10 million in Miami have increased 158% over the last two years, according to a 2021 report by Compass. About 40% of these buyers are from California and 40% are from New York, with the rest coming from other high-tax states.

“The demand for luxury product has increased so dramatically,” said Chad Carroll of Compass. “Developers have recognized that and I think we will see it increasing over the next couple of years. We’re seeing a level above what Miami has had in the past.”

“People want that ultra-high-end product, and South Florida really doesn’t have enough of it,” Mr. Carroll said. “Everybody realizes that there is a high demand for this type of product.”

Developers can now build luxury condos and pre-sell them, before construction begins, he said. “It’s like what we saw seven or eight years ago. Four years ago, it was very slow and hard for them to pre-sell.”

As far as what areas are seeing the most activity, “we’ve seen the Surfside area [become popular], and downtown and Brickell have become extremely popular,” Mr. Carroll said. “Sunny Isles has been popular for many years now.”

Coconut Grove was “really overlooked for many, many years,” he said. “It’s a gorgeous community, very walkable. It’s a cute little town with great little restaurants, and now we’ve seen an explosion in prices. You’re buying a lifestyle in Coconut Grove.”

Let’s take a look at the new Vita at Grove Isle condos in Coconut Grove, along with four other new Miami developments making news. 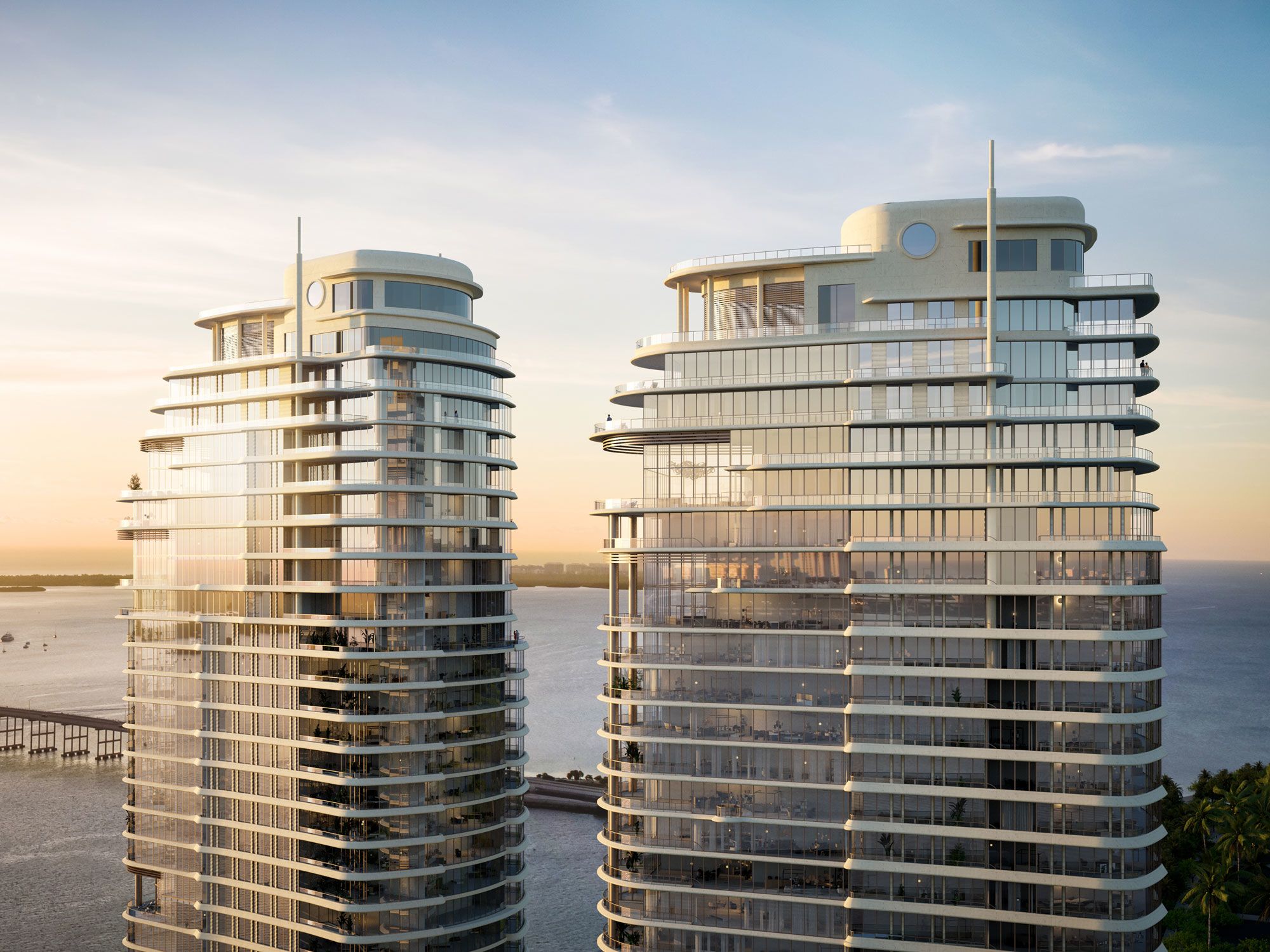 Related Group and Integra Investments are bringing a pair of luxury condo towers with the historic St. Regis brand to Miami’s Brickell financial district. Architect Robert A.M. Stern and his New York-based firm RAMSA are working with the Rockwell Group on the design of the 47- and 48-story waterfront towers, where prices will range from $2 million to over $40 million.

The 354-unit development will have open views of Biscayne Bay and more than 60,000 square feet of amenities, including some that guests at the original St. Regis hotel in Manhattan have enjoyed since it opened in 1904. Sales launched in February and the expected completion date is early 2026.

Amenities: The brand’s signature butler service and tearoom will be part of the amenity package, along with a fitness center, an open-air exercise deck, a golf virtual reality room, a sky-level bar with sweeping water views, a cognac room, a central spa area with private treatment rooms and cold-dip and regulation lap pools. 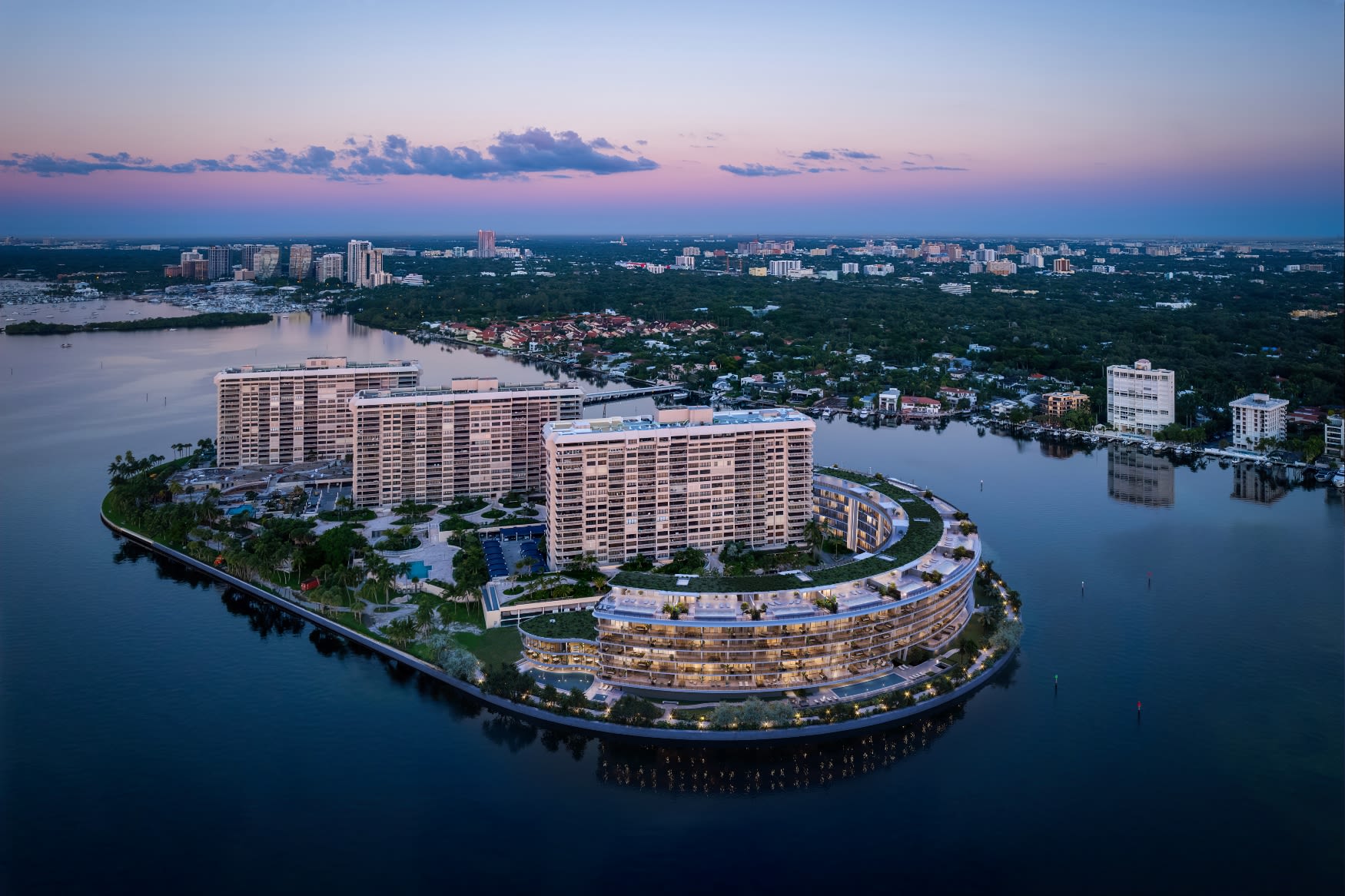 This six-story boutique condo development by Ugo Colombo of CMC Group will be on the last remaining waterfront parcel on Grove Isle, a 20-acre gated and private island just offshore of Miami’s popular Coconut Grove neighborhood. The building’s curved facade will mimic the natural contour of its waterfront location and ensure that all of the 65 residences have unobstructed and panoramic views of Biscayne Bay, Downtown Miami and Coconut Grove.

The penthouses will have private rooftop terraces with a swimming pool, a full bathroom and a summer kitchen. Additional resident perks include for-purchase individually enclosed private one- and two-car garages designed with provisions for electric vehicle charging, 24/7 valet service and bicycle storage. Sales are expected to launch in April, with construction estimated to begin later this year and completion slated for late 2024.

Number of Residences: 65, including 12 bi-level penthouses

Amenities: A high-end restaurant and bar serving lunch, dinner and cocktails; a private residents-only bayfront pool, poolside bar and lounge; a residents-only wellness center with a state-of-the-art gym, a dedicated studio room, and a spa with men’s and women’s locker rooms with saunas and steam rooms; house membership to the Vita at Grove Isle Club, which offers a bayfront pool and a poolside bar; lighted tennis courts and pickleball and paddle courts; Grove Isle marina with boat slips; and a children’s playground. 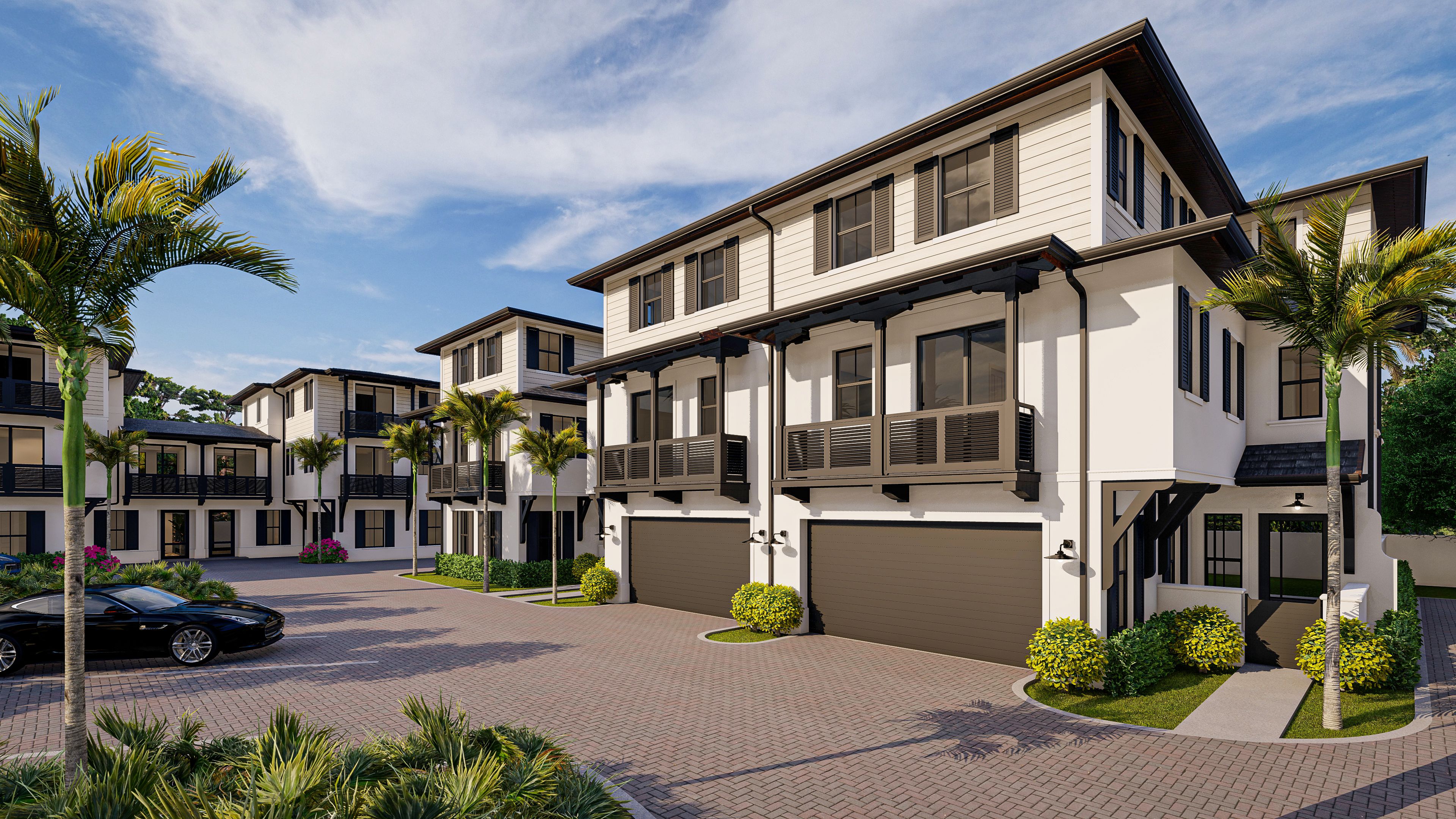 This collection of 18 townhome units on more than two acres in the Dade County village of Pinecrest is being developed by Stephane Rosarion and his Miami-based company, SCAROFA Properties.

All of the three-story, four-bedroom units will be delivered turnkey, with buyers having the option to choose among three floor plans. Each of the townhomes will have a two-car attached garage, an elevator, bedrooms with walk-in closets and a private backyard. The Mia Cucina kitchens will feature Sub-Zero and Wolf appliances and quartz countertops. The project is scheduled to break ground in March 2022, with completion slated for April/May of 2023. Sales launched in February.

Amenities: Elevators, two-car attached garages and private yards. There is a pool in the center of the community. 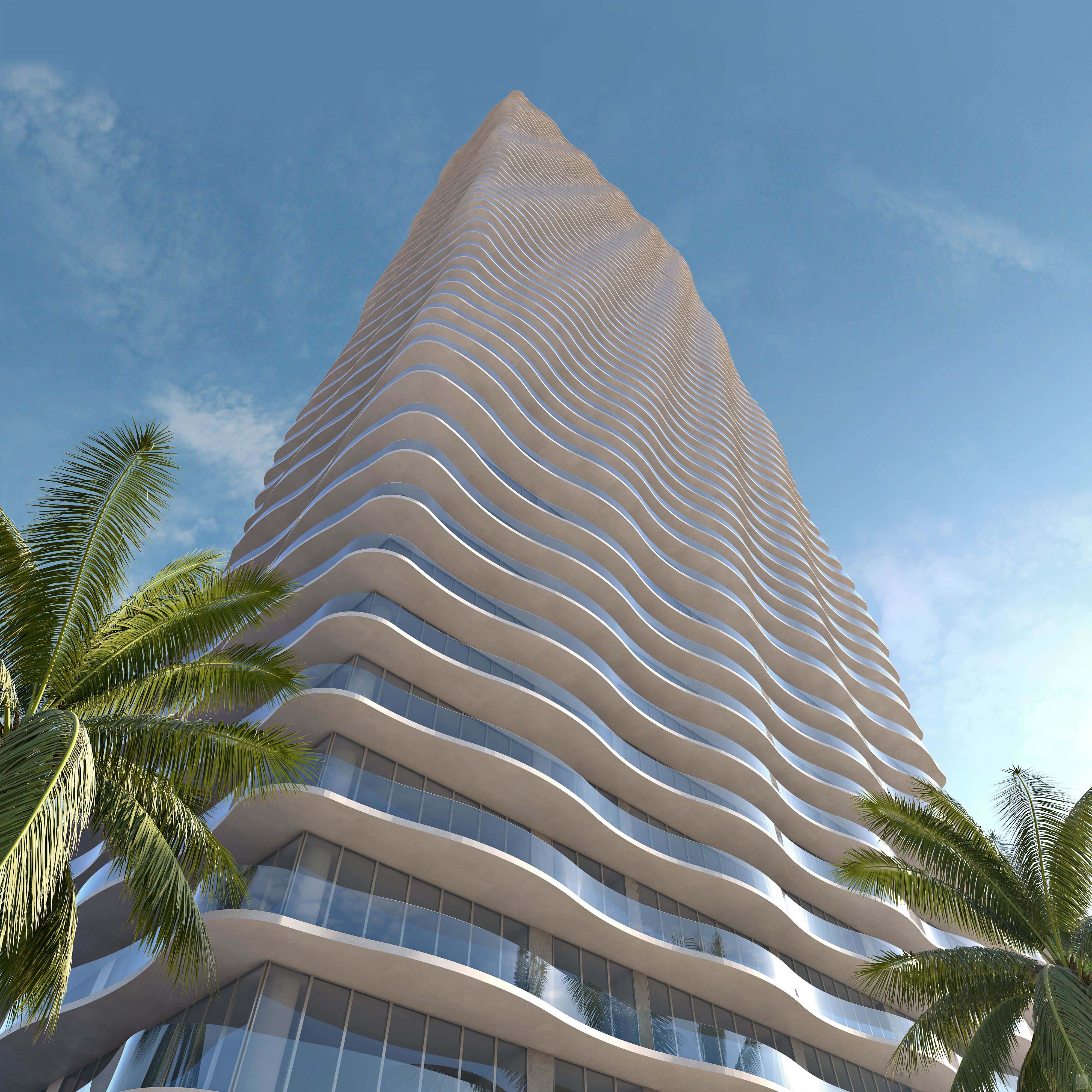 Developed by Related Group and Alta Developers, Casa Bella Residences by B&B Italia will offer 312 luxury condos in a new 55-story tower at 14th Street and Biscayne Boulevard in the heart of Downtown Miami’s Arts and Entertainment District.

It is the first branded residential project for B&B Italia, the well-regarded Italian furniture company known for its modern furnishings and collaborations with brands like Rolex, Hermès and Rolls-Royce. Residents will have open views of Biscayne Bay as well as easy access to nearby attractions such as the Pérez Art Museum Miami, the Frost Museum of Science, the Adrienne Arsht Center for the Performing Arts and the FTX Arena as well as Miami Beach, Coconut Grove and Brickell.

The residences will feature high ceilings, European fixtures and finishes and private elevator access. The four upper penthouses feature 12-foot ceilings and wrap-around terraces with open water and city views. B&B Italia will offer move-in-ready packages with furnishings and décor for each unit type. Buyers can choose from a range of floor plans and work directly with B&B Italia’s designers to outfit their units.

Sales launched in January, and the official groundbreaking is set for late 2022, with completion of the tower slated for 2025.

Amenities: The two full floors of amenity spaces will include a party room, a wine vault and tasting lounge, a private theater, co-working spaces, a wellness center, spa facilities, dedicated yoga and spinning rooms, a 78-foot lap pool with private cabanas, an open-air lawn for yoga and mediation, a poolside bar and Mediterranean café, a 55th-floor rooftop pool and terrace, an observatory and personal concierge services. Additional benefits include preferred tickets to performances and local events and a complimentary one-year membership of the Grand Bay Beach Club in Key Biscayne. 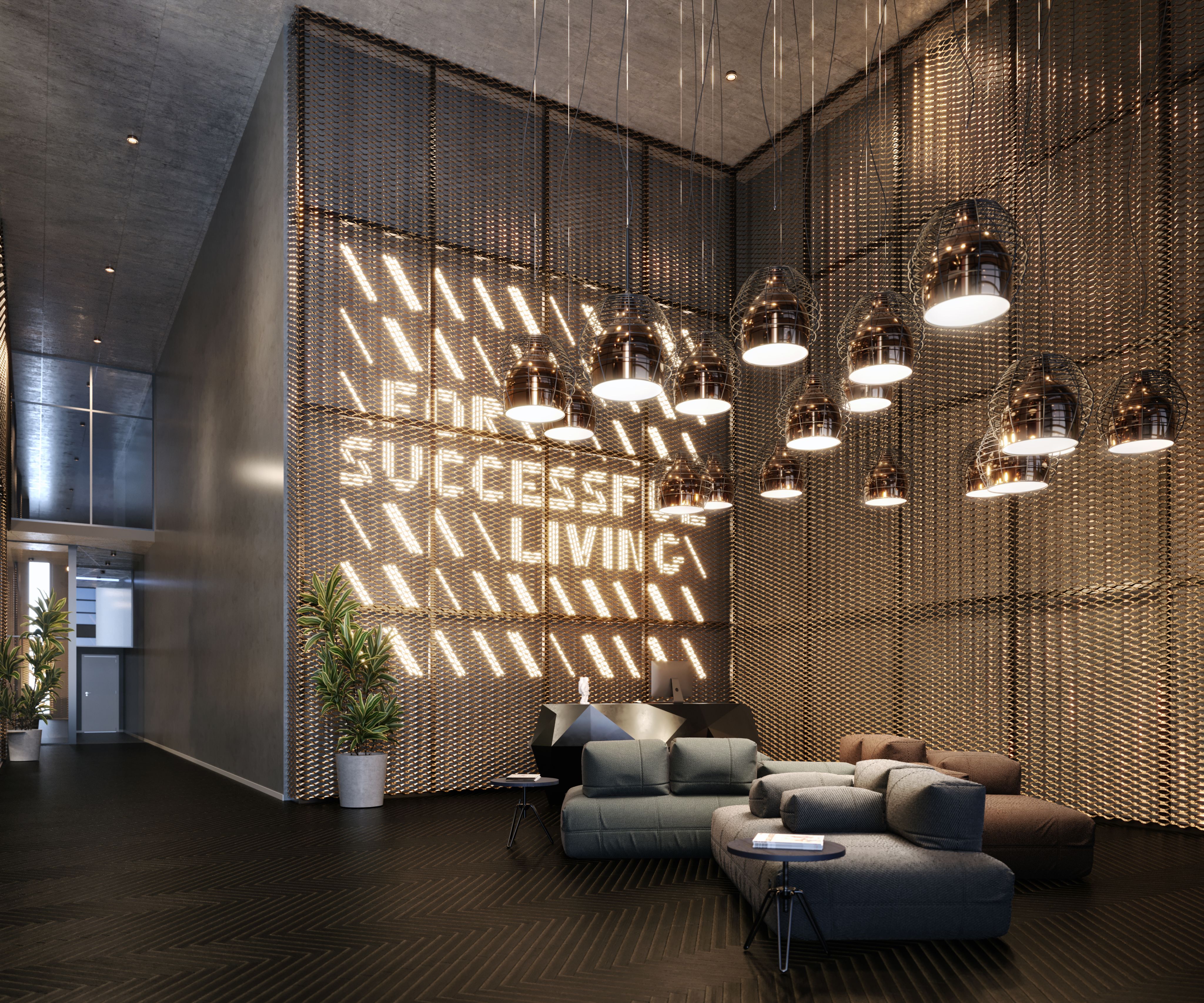 Bel Invest, an international real estate investment and development firm with projects in Italy, Spain, Germany and the U.S., is partnering with the global Italian fashion and lifestyle brand Diesel to build this eight-story project with 159 condos in the heart of Miami’s Wynwood arts district.

The 14 penthouses will have high-end finishes, including cosmic liquid marbling in the bathrooms, and private rooftop terraces with options for a hot tub and an outdoor kitchen. Turnkey residences will be available by Diesel Living. The Wynwood neighborhood offers easy access to Miami Beach, Downtown Miami and Brickell. Sales launched late last year, with construction slated to begin in mid-2022 and delivery in 2024.

Residence sizes: The units will range from micro-studios with one bathroom to three-bedroom units with three full bathrooms and one partial bathroom, from 395 to 4,105 square feet.

Amenities: A rooftop area with a pool and deck, a lounge, gardens, an indoor living room, a dining area and full kitchen; a wine cellar/library with secure storage and climate control, accompanied by an event space for tastings and gatherings; a conference room with a co-working area; a European-inspired spa with therapeutic steam rooms and aromatherapy stations; a fitness center; a yoga area; electric vehicle charging stations; and private bicycle storage.