Home » Headlines » The 13 Most Beautiful Restaurants in Madrid

The 13 Most Beautiful Restaurants in Madrid 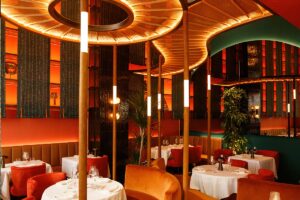 This article has been written by six hands between Alberto del Castillo, Selene García Torreiro and Isabel Nieto.

It is an increasingly frequent custom that the press release with which the opening of a new restaurant is reported includes two authorships: the one related to the chef and the one related to the interior design. At a time when gastronomy seems to be governed by a dogma – food not only has to be good but it also has to look good – the extension of appearance passes from the plate to the rest of the place.

Thus, architects and designers work in restaurants that over the decades will be studied as a projection of a contemporary feeling, as a fashionable place among the people of the time or as future dumps of nostalgia. Madrid, with thousands of restaurants (at least 50 of them you have to try before you die), has a vast gastronomic offer that is remarkable at best. But since the experience does not consist in living it but also in telling it through images, there are restaurants that make you fall in love with their beauty and that justify the visit only as a space for visual or functional delight. 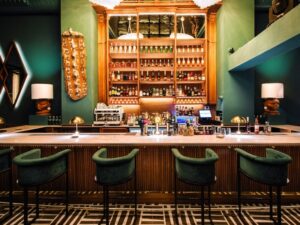 Caluana is simply a restaurant that is inside a church. This thing is reminiscent of a Bosch painting: with a symbolic division of spaces. Below is the Olivar –cocktail area–, above is the Invernadero –the non-terrace– and in the center is the chapel –the most unusual area compared to almost any other restaurant in the world. Caluana is not only the proof of being under 16th century vaults doing something that is not usually done under 16th century vaults, but also tasting a menu that is defined as Italocastiza. 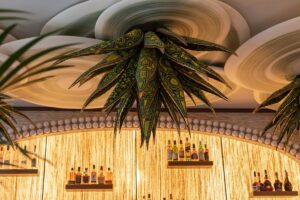 The Mexican restaurant that triumphs in Miami could not arrive in Madrid with a discreet interior design display. It is a job that has been carried out by the Cousi interior design studio. The decorative will has had and achieved the purpose of evoking Mexico in every cubic centimeter. From the hundreds of cacti that are distributed throughout the premises to the agave recreations inspired by Huichol art that hang from the ceiling. All this contributes to the feeling of being in Mexico in every second of the experience. 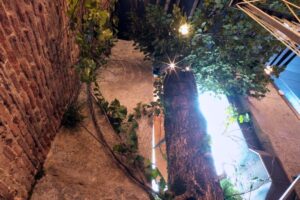 The Olmo brothers give their gastronomic project a last name. It is a proposal that defends the value of the origins and that has nature very present. Green fills each of the seven rooms in this renovated space, peaceful and full of harmony. Olmo is an off-roader. A perfect place for any meal and any day of the week, from work meetings to dinners with your partner. The menu could not be less, and has a wide variety of seasonal products. That is the hallmark of this project that treats the raw material with great care. 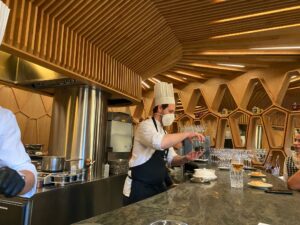 The concept of the bar is almost that of Spanish-style itamaes: the chefs prepare each dish from the beginning or finish it off in front of the diner. It is not that you eat in the open kitchen, it is that the kitchen constitutes the views per se. The chefs explain each dish, answer questions and help understand what one is eating. Decoration is a fundamental factor in the A’Barra experience: from the surprising component hidden by the impossible shapes of the wood that shapes the interior of the bar, to the LEDs that change their intensity depending on the time of the meal we are eating. 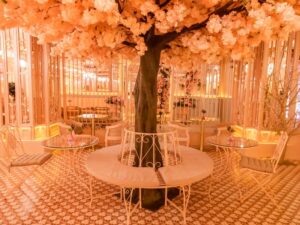 It is well known that Salvador Bachiller’s restaurants are, in all their possible forms and themes, a feast for the eyes. And its latest gastrobar to open, Bloom, could not be less: a veritable explosion of pink plants, to which are added stained glass windows, a pavilion and a very careful decoration that turn each corner into a perfect frame for Instagram. As a novelty, from the month of March they will begin to program dinner shows: they will start on the 4th with a live jazz dinner show and from March 18 there will be shows with dancers on Fridays and Saturdays.

To see the rest of the 13 most beautiful restaurants in Madrid, please click here.