(CNN)It’s the summertime playground for some of New York’s most affluent residents. But the Hamptons real estate market seems to have lost some of its buzz.

This year the Hamptons experienced its slowest market conditions since the financial crisis, with sales slipping at the high end and inventory rising, according to a report from Douglas Elliman.
That was partially due to year-end volatility in the financial markets, but also because of changes in the tax law for 2018.
“Any time there is a new tax law, you’ll find buyers sitting on the sidelines waiting to see how it shakes out,” says Todd Bourgard, Douglas Elliman’s senior executive regional manager of sales for the Hamptons. 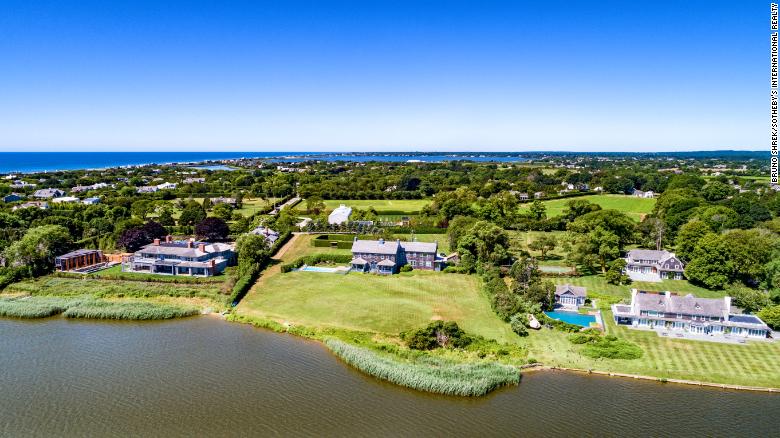 This proprty sold for $26 million after originally being listed for $37 million.
The tax reform’s $10,000 cap for state and local tax deductions put downward pressure on the markets. During the first half of the year, agents were just sitting in the office, says Bourgard. While the market is still showing signs of softness, he says it has recently become harder to convene a meeting with his agents because so many are out showing properties.
Still, the supply of homes on the market remains high. The number of months it would take to unload all the inventory at the current rate of sales slowed to 15 months from 8 months a year ago.
But most of the inventory is sitting at the top of the market. While the share of properties that sold under $1 million during the last quarter is up slightly compared with last year, the share of sales over $5 million is down more than 18% since last year.

Buyers have the upper hand

The downturn has translated into some pretty good deals for buyers, who snatched up an average discount of 10.4% off the original listing price during the second quarter, according to the Douglas Elliman report.
A five-bedroom Nantucket-style home sitting on four acres with a pool, tennis court and its own private beach on Sagg Pond, was originally listed at $37 million, in March 2018, according to the agent that sold it. Eleven months later, in February of 2019, it was reduced to $34 million. It sold in May for $26 million — 30% off the original listing price.
Deborah Srb, the agent with Sotheby’s that sold the property for $26 million, said the sale was a reflection of what is going on in the market.
“It is definitely a buyer’s market and they have the upper hand,” she says.
The “luxury” segment of the market represents the top 10% of home sales in the Hamptons. In the second quarter, prices for luxury homes were defined as those starting at just over $4 million. There were no bidding wars last quarter for these top-tier homes and there weren’t any sales at list price either, according to Jonathan Miller, president of Miller Samuel, a real estate appraisal and consultant company that prepared the data for the Douglas Elliman report.
Even for homes that fall below the luxury threshold, buyers are bidding low.
Peter Moore, an agent with Corcoran Group, plans to bring a buyer to an East Hampton property priced at $1.295 million this weekend. The buyer plans to bid $1.1 million.
“And that’s a firm bid,” says Moore. “If the seller doesn’t accept, my buyer already has their eyes on another home and will bid similarly there.”
So far this summer, Beate Moore, an associate broker and senior global real estate adviser at Sotheby’s International Realty, says she’s heartened that people are out there looking, at least, even if properties aren’t selling as fast.
“People are not cutting to the chase quickly,” she says. “We were spoiled in the past. If you show the listing, they like it and they come back the second time with family, you assume it is a done deal. But now, in fact, it isn’t.”