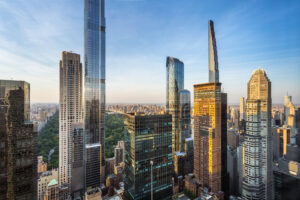 Homes $10 million and up saw record demand last year in South Florida and New York City, as affluent buyers hungry for more space flooded the market amid the pandemic.

“2021 was nothing short of extraordinary,” Garrett Derderian, director of market intelligence at SERHANT, said in the report.

“Prior to the pandemic and in most of 2020, there was serious concern regarding the number of larger apartments, especially in new developments, that were on the market and had yet to come to market,” he said. “However, the dynamic shift in buyers’ preferences, along with remote work, prompted many to seek out larger apartments.”

In New York, the highest-priced condo sale was a penthouse in 220 Central Park South for $188 million, sold by billionaire investor Daniel Och, who had paid  $92 million for the property in 2019.

Sales in the ultra-prime market are a “great barometer for market health,” according to Mr. Derderian. “Investment at this level speaks to the confidence wealthy buyers have in Manhattan. These sales have historically been a leading indicator for activity at lower price points, which was also robust in 2021.”

Trophy-home investors’ most popular areas in New York City were Billionaires’ Row, a stretch of luxury building around West 57th Street in Manhattan; downtown Manhattan and the Upper East Side. These areas have been the costliest for years, and the buyer preference shifts that resulted from the pandemic only made them more desirable, according to the report.

“We expect this trend to continue for the foreseeable future,” Mr. Derderian said.

In South Florida, including Palm Beach and Miami, super-prime sales set records both in numbers and average sale prices.

Combined, super-prime sales in Palm Beach and Miami in 2021 surpassed the number of sales in the three prior years combined.

“The super-prime market in South Florida has never been stronger. We saw the most expensive home ever to sell in the state, and the most expensive home ever sold in Miami. Right now, there does not seem to be a clear ceiling on just how pricey these homes will become. Demand is outweighing supply at an alarming rate, pushing prices even higher,” Mr. Derderian said in the report.

The report also noted that the pandemic has contributed to the increase of purchases in South Florida as buyers temporarily fled the Northeast seeking a warmer climate and less dense areas.

In addition to the typical trophy-home buyers, increasing numbers of wealthy crypto investors introduced a new dimension to the luxury real estate market.

“Many holders of the various currencies have chosen to park their newfound wealth in hard assets, with real estate a top choice,” Mr. Derderian said.